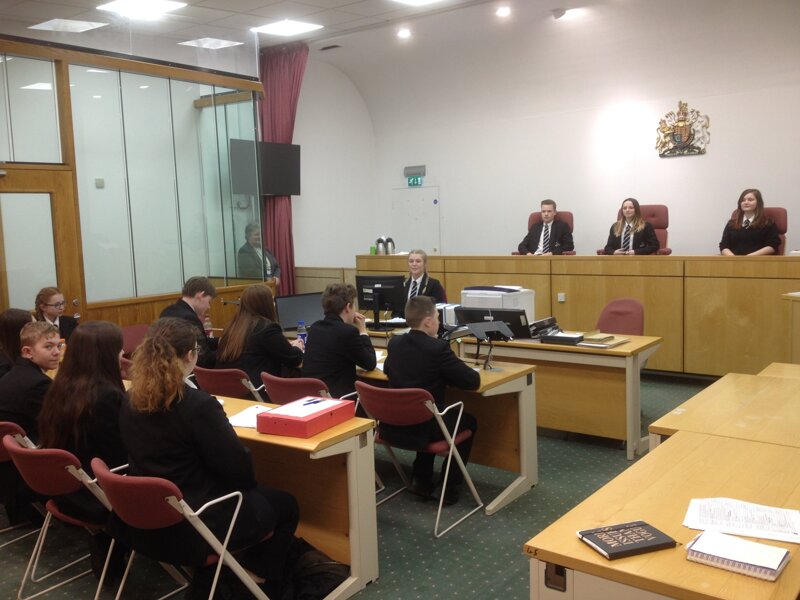 The Mock Trial is a national competition run by the Citizenship Foundation with the aim of helping students to understand the British legal system; in particular to help students understand how the Magistrates’ Courts are run.

Students take on the roles of lawyers, witnesses, magistrates, court staff and the defendant, and prior to the competition day have to work through all of the information given regarding the case in order to present their own version of events, in character.

On the day each team performs twice – once as the Prosecution and once as the Defence, taking on different schools as their ‘opposition’.

This year’s event was even more stressful than usual due the competition taking place at Newcastle’s Crown Court – at the same time as a high profile murder case! Due to the importance of the event, Susan Winfield, representing Her Majesty the Queen in her capacity of Lord Lieutenant for Tyne and Wear, awarded the prizes.

Although Longbenton didn’t win, our students performed excellently on the day and were very highly praised for their hard work, behaviour and understanding of the case. They had a fantastic day and made myself and Mrs Carr very proud!

Our First Defence Lawyer, Jed Beyer gives his verdict below:

The Mock Trial Competition was an excellent experience, and something that I would definitely take part in again if given the chance. It's a great confidence booster, and was a lot of fun. I was hesitant to participate at first, being one of the last to take a part, but I'm very glad I did. Many people dropped out and others who were more dedicated took their place, so it became an atmosphere of enthusiasm and enjoyment.

We practised our skills for months, and visited a courthouse before the competition, so when the date rolled around and it was time to go against the other schools participating, we were fully prepared. That doesn't mean we weren't nervous, but when we were in our places in the courtroom, the fear was replaced with determination and we enjoyed it wholly.

While we didn't win the competition, we felt we did well and received much praise, and we were very proud of ourselves. We had a lot of fun participating, and we are all happy we took part in and stuck at it all the way through. It was definitely worth using a Saturday for. If anyone reading this gets the chance to participate in the Mock Trial Competition, I would say join in, because you'll be glad you did, and I hope I get the chance to participate in a similar competition at some point.